out of the darkness 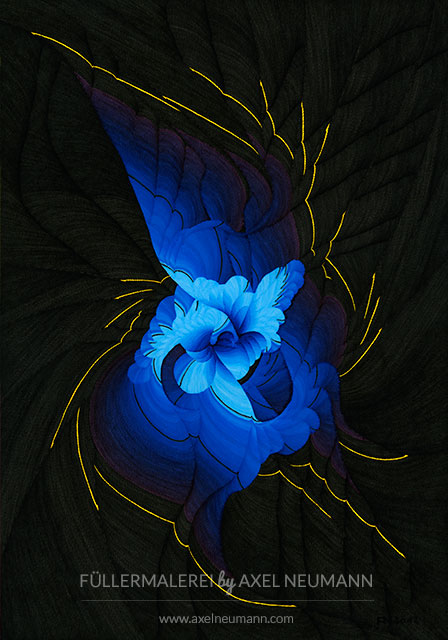 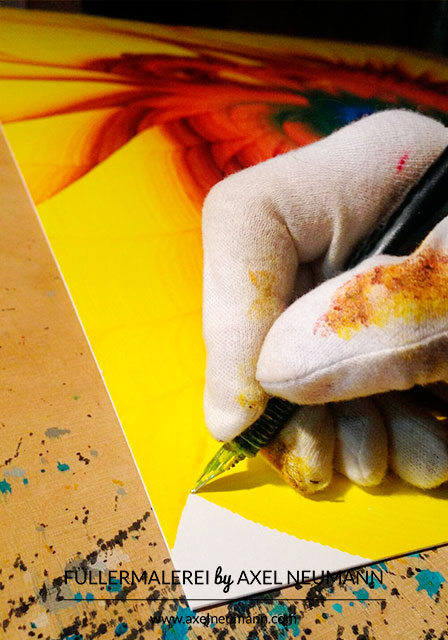 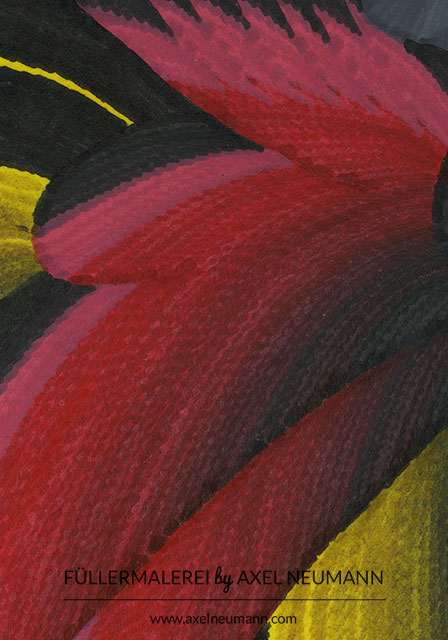 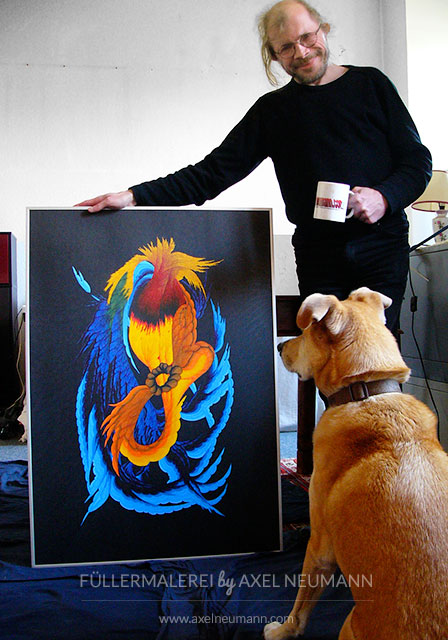 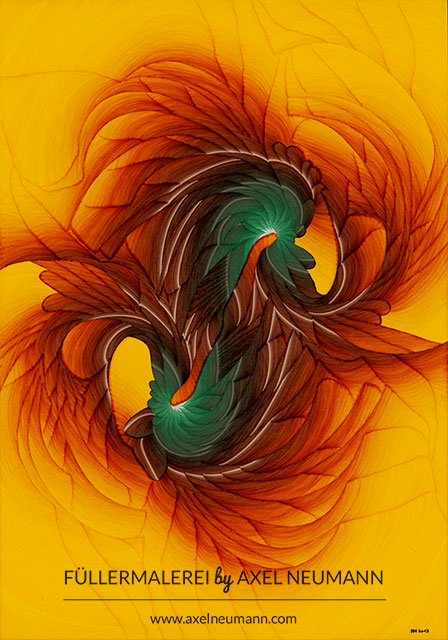 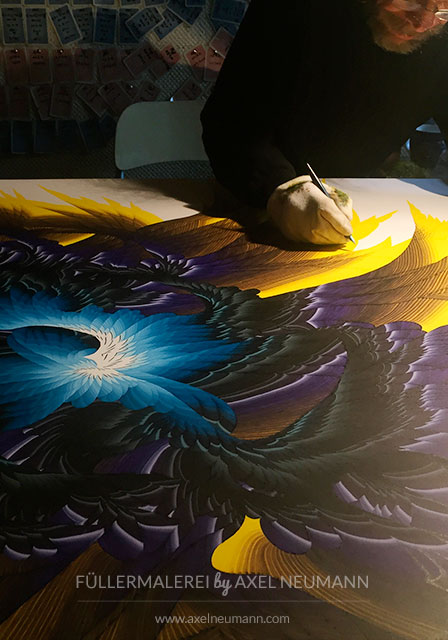 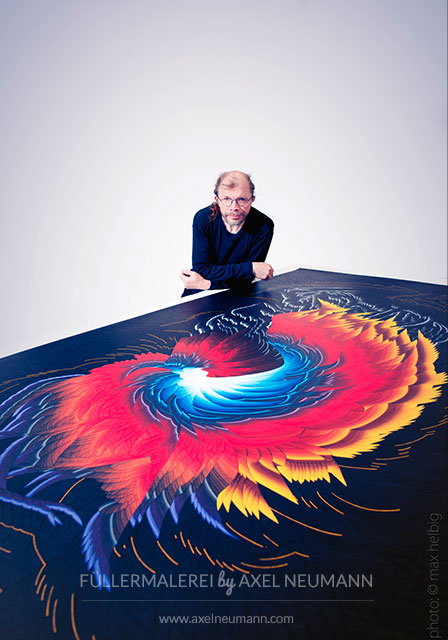 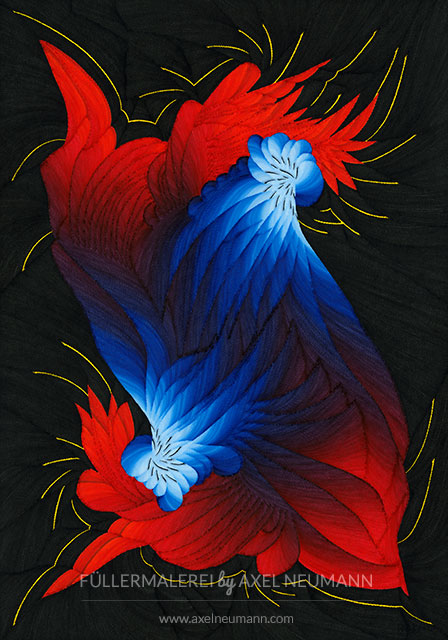 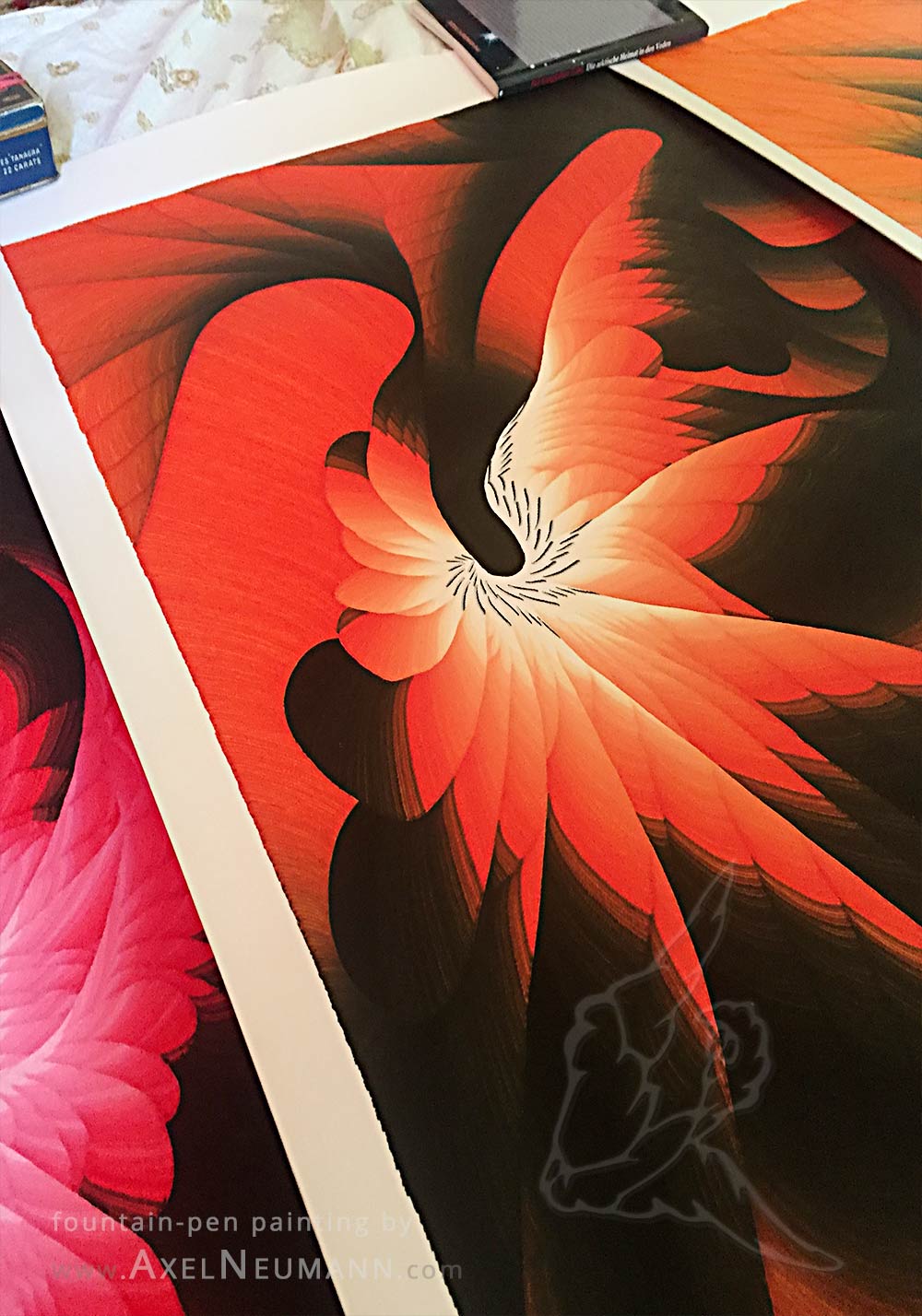 In 1992, an instructor made the suggestion to place oneself in some sort of extreme situation as a means of self-discovery. Axel Neumann made the radical decision to place himself in an environment of complete darkness, silence and isolation for a three weeks. During this experience, a world of images revealed themselves to him.

To this day, he continues to paint what he saw then.

Since he could not reproduce the dynamics of the luminous worlds seen during his retreat with any painting technique known to him at that time, he had to develop his own painting technique: this was how fountain pen painting came about. Since that experience, he can not only see colors, but hear them as well.

Nowadays this "experiment" might seem extrem. But in the antiquity this intensive kind of introspection was a regular practice. People used it to find answers to important, vital issues or to cure severe diseases. They called it incubation or „temple sleep“. At that time, people interpreted the ideas, visions and feelings which were evoked by the deep immersion into their own subconsciousness as the conversation with the gods.

Click here to read what Yulia Ustinova, archaeologist and expert for alternate states of consciousness in the ancient Greek culture from the university of Negev, states about Axels art. 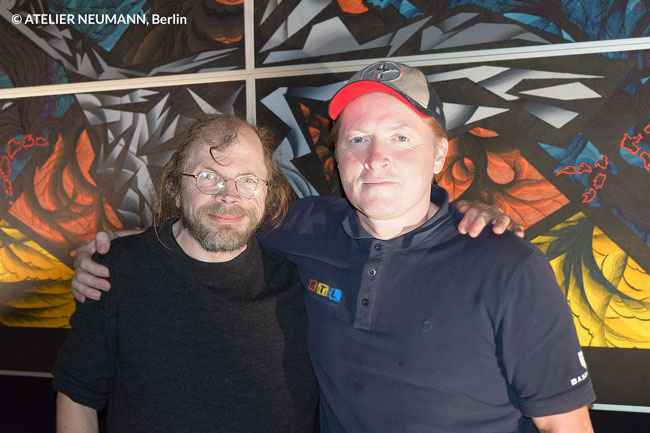 “
My friend Axel is an incredibly talented artist. His art fascinates me because it is the result of a borderline experience. If someone locks himself into darkness and silence ventures the legendary ride on a razor blade. Axel has risked a great deal and gained everything. Now his paintings are here and they are breathtaking.

As a person I am impressed by his enormous performance. To paint up to 18 hours at a stretch by day and this over years, is mental endurance at its best. For me Axel is an extreme artist who deserves highest respect.


Joey Kelly, extreme athlete and adventurer in the journal “Schreibkultur”, 4/2017
The experience also had two neurological consequences: It triggered a synaesthesia. Axel Neumann can not only see colours but also hear them. Moreover, he has developed an extraordinary memory capacity. Until today he has stored the enormous number of motifs in his head. He can recall them at any time, which can take a few hours or even several weeks depending on the motif. This special ability, however, cannot be transferred to other tasks - to the artist's great regret.

Nowadays such an experiment may seem extreme. In ancient times, however, this intensive form of self-examination or meditation was common practice. People did it to get answers to important questions of life or to cure diseases. Scientists see it as a neurological model. People in altered states of consciousness begin to see geometric shapes, which are understood as meaningful symbols depending on their cultural background. Often dynamic whirlpools are created which seem to suck people in. The different sensory stimuli merge.

Also in the eyes of the Israeli antiquity researcher Prof. Yulia Ustinova, the visions and sensations associated with the withdrawal of external stimuli are universal. She sees them embodied in the art of Axel Neumann. Ms. Ustinova is the author of the book „Caves and the Ancient Greek Mind. Descending Underground in the Search for Ultimate Truth“ (Oxford, 2009), she writes:

"When I first saw the creations of Axel Neumann and learnt that the impetus for these works of art was his retreat into absolute darkness for three weeks, I was stunned. I am a Classical scholar studying ancient religion, and about a dozen years ago I realized that in their quest of the hidden truth and ecstatic illumination, ancient Greek sages, seers, and initiates into mystery rites practiced prolonged isolation in caves and other closed dark spaces. In antiquity, sensory deprivation attained in such places was used as a technique of imagery cultivation. In the modern research of alteration of consciousness, the sensation of passage through a rotating dark space terminating in bright light in the center of the field of vision is known as the vortex experience. It often occurs in the state of sensory deprivation, when elimination of external stimuli forces the mind to concentrate within itself and brings about intensive discharge of inner imagery. Axel Neumann discovered the tremendous potential of this experience and revealed it in his paintings."

Download here, what Prof. Ustinova writes about his art.

To paint with a fountain pen 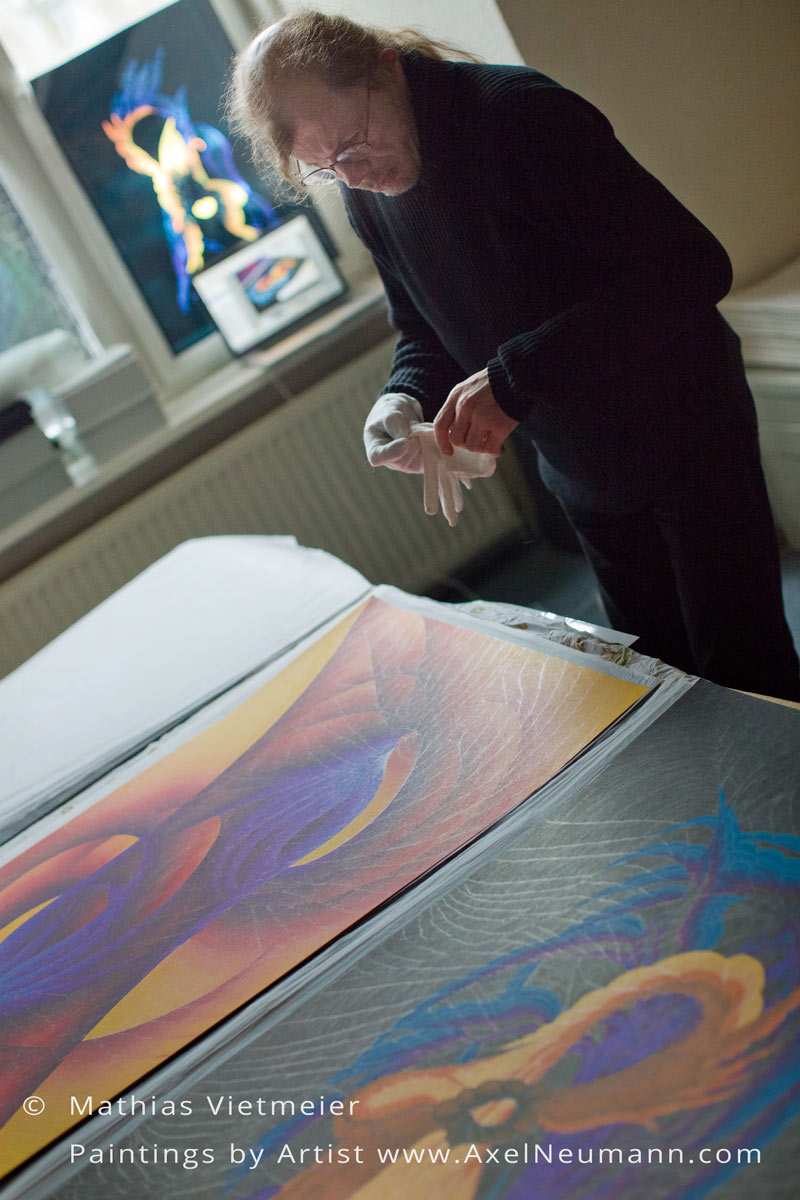 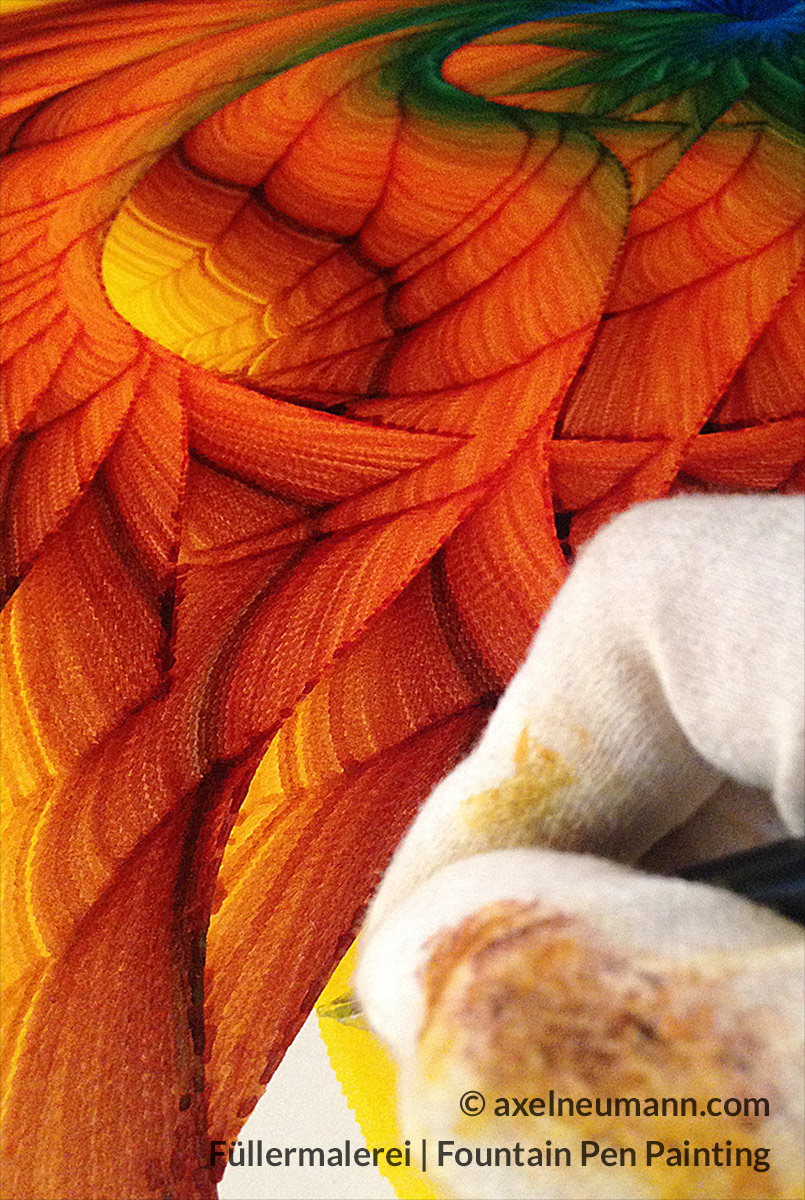 Without a preliminary drawing, the artist joins countless strokes, none bigger than 1-2 mm, according to an own system. Fountain pen painting is a ritual of artistic precision and care, performed in meditative slowness. It takes months, sometimes years, to produce a large format. The motif’s surreal aesthetic is unique. They are pictures of dynamic worlds and fantastic shapes. They evoce mystical structures from nature.

Axel Neumann works with acrylic paint. The combination is technically nonsensical because the pigments would actually clog the fountain pen. How he still manages to merge the materials remains his secret. The colours go through a multi-stage mixing act before they are applied to the cardboard.

In the following TV report, he enlarges on what he experienced when he locked himself in his flat and how it changed his life (unfortunately the video is only in German – sorry for that).

This feature is a live recording of the German TV station NDR. It was broadcasted in August 2012 in preparation of an art show, which his lovely fellow actress Cosma Shiva Hagen – the daughter of the singer Nina Hagen – organized for him.
Length: approx. 16 Minutes
Empfehlen Sie diese Seite weiter:

“
Who would paint with ink and a fountain pen? There might be one or two illustrators who do that. But to abandon ink for acrylic paint is a genius idea, the result of which we can do nothing but admire.
This is how the journalist H.P. Lichtwald described the pioneering achievement of fountain pen painting. 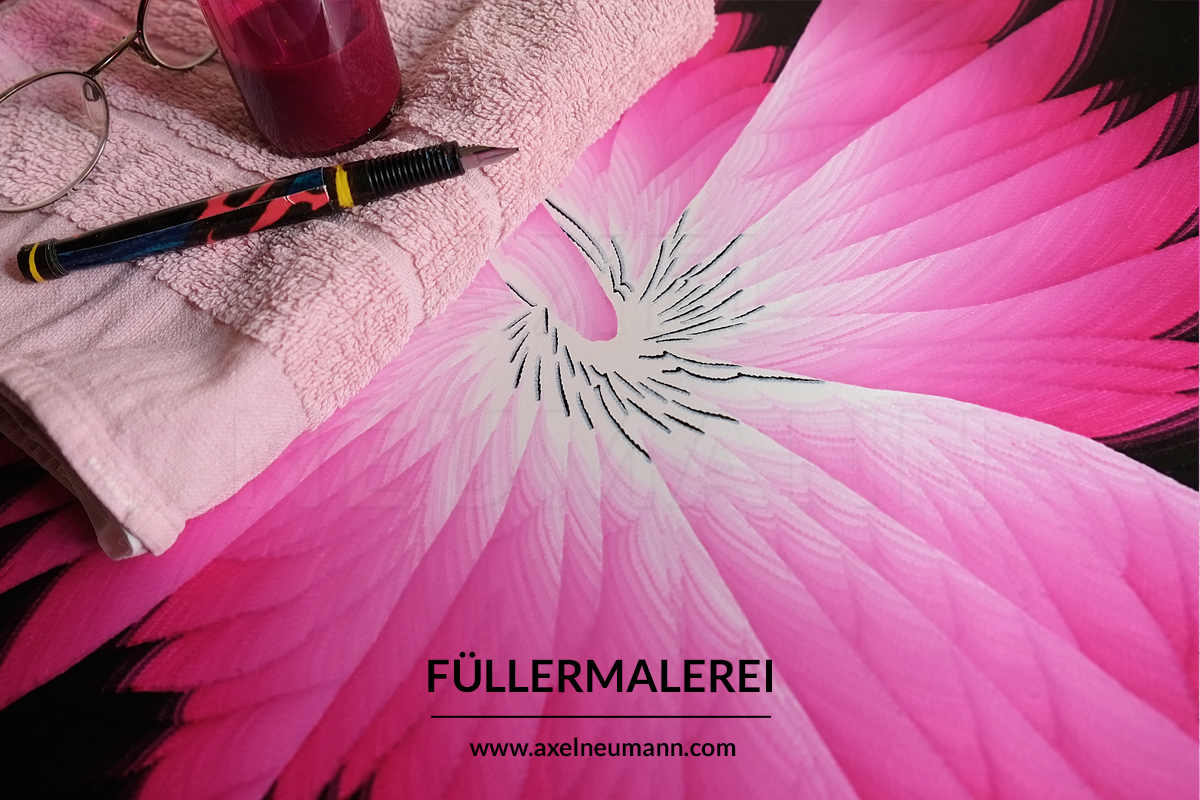 “
Dear Axel,
Just to say more "officially" how much I think of your art and of the motivations behind it. We need more than ever visionary artists like you. We must also dare to reclaim the beauty and power of monumental art from those who stole it from us (and so corrupted it!) in the 20th century. Wishing you all the very best!